The concept of map-fare builds on the ideas of war-fare and law-fare (the use of law for strategic purposes) to explore how maps are more than representations of territory: following the French verb faire, they can actually "do" things and creatively "make" politics. Map-fare also looks to the Chinese word for map tu 圖, which as a noun means “a picture, a diagram, a chart, a table, and a map,” but as a verb means “to hope, to scheme, to plan, to plot against, to covet.”
The Sykes-Picot map was secretly drawn by British and French diplomats in 1916 to divide up the Ottoman Empire during World War I. This image doesn't just describe the situation as “a picture, a diagram, a chart, a table, and a map.” Rather, it actively “hopes, schemes, plans, plots against, and covets” to create a new regional order that still angers many people in the Middle East today.
With map-fare, maps are world-making in the sense that your cartographic "view of the world" shapes your ideological "worldview."

The South China Sea is a global hot-spot, bringing together competing claims for maritime and land territory from the PRC, Taiwan, Vietnam, the Philippines, Brunei, Malaysia, and Indonesia. The US is involved because it wants to uphold freedom of the seas.
Rather than just a place of diplomatic or military struggle, the South China Sea is also a site of "map-fare": in 2016, the UNCLOS tribunal was a struggle between (1) geographic and geological maps from the Philippines, and (2) historical maps from the PRC that promoted claims to the U-shaped Line (aka the 9-dash line).
In 2012, for the first time the Chinese passport included the U-shaped line on the PRC's official logo-map. This map "does" things: it evokes pride among some Chinese, while at the same time provoking anger from Vietnamese officials who have to recognize this map every time they stamp a Chinese passport.

If your cartographic "view of the world" produces your ideological "worldview," it is important to see how China's historical maps engage in map-fare in ways that inform and explain the PRC's 21st century claims in the South China Sea. Rather than serve as evidence for sovereign territory claims, these historical maps work with each other, and respond to each other, to celebrate China’s imperial expansion, lament its lost territories, and fight to recover them.
Chapter 7 of Sensible Politics looks at four early-modern maps from China and Korea to probe their ideological meaning and affective influence. The "Complete All-under-Heaven map of the Eternal Qing Great State" (1811) combines accurate mathematical plotting with fantastic story-telling. When you look at the high-res version, you can see that it plots a particular worldview: not the Westphalian world order of equal and sovereign nation-states, but the Sinocentric world order of a hierarchical tributary system. This "All-under-Heaven" map includes long descriptions that praise Korea and Vietnam for being loyal vassals, and others that criticize Japan for its past as a “country of dwarf pirates.”

Ch’eonhado, which is the Korean word for All-under-Heaven map (Tianxia), provides a more aesthetic form of Sinocentrism. This "wheel map" of concentric rings presents Korea’s ideal world: China is at the center of both territory and civilization, and Korea is close by, while Japan is small, farther away, and thus more "barbaric."
This is a strong example of map-fare in early-modern East Asia: since it was made in Korea, it shows how China’s soft power colonized the Korean imagination up through the turn of the 20th century.

Ch’eonhado was the first map in Korean atlases; the next map was of China itself.
Although this map of China was made during the Qing dynasty (1644-1911), it didn’t represent the territory of the Qing Great State, but that of the previous regime, the Ming Great State (1388-1644).
Why?
These world maps actively resisted what Koreans saw as the “barbaric” Manchus by plotting the map of China according to the properly civilized Ming dynasty, which Koreans hoped would soon be restored.
These Korean maps thus show the map-fare of how Chinese cartographic conventions and techniques could produce resistance to the Manchurian regime.

The Ch’eonhado’s map-fare for the restoration of the proper Confucian order is not unique. Chinese maps during the Song dynasty also plotted the restoration of the proper normative order by recapturing territories from “barbarian” invaders.
The most famous Song map is the “Map of Civilization and Barbarism” (1136). It was engraved on a stone stele, which underlines how the purpose of maps is instruction. But this instruction was not in the actual borders of the Song empire. After decades of struggle, the Song signed a peace treaty to formally recognize Jin dynasty control over territory North of the Yangtze river.
These maps convey a clear political message: they reminded the Song emperor of how much territory had been lost, and how it was his responsibility to reconquer the North to reunite the empire, and reunite the world.
Once again, this is map-fare: the map does not reflect reality on the ground. Rather it shows how emperors and poets “coveted” lost Northern territories, and “schemed” to restore lost glory through recovering them.

After fall of Qing dynasty in 1911, the size and shape of "China" was not clear. This "Map of the Republic of China" (1912) is the first official map of post-Qing China. Like the Song dynasty map of civilization and barbarism, it is a map of lost territories: most of the countries surrounding China are labeled "originally in our country, now in Japan" (or France, Britain, or America).

This map is more explicitly a map of lost territories. It was published in Xie Bin’s popular History of China’s Lost Territories, and presents an idealized view of the territory controlled by the Qing, in order to claim as Chinese the vast territories that are now independent nation-states in Northeast, Southeast and Central Asia: Korea, Thailand, Afganistan, etc.
Curiously, what here are labeled as "Lost Territories" were marked as "loyal vassals" and "gained territories" on China's late imperial maps.
Like Ch’eonhado, this lost territories map employs two sets of rings to claim vast territories as "Chinese." What these places have in common is a history of presenting tribute to the Chinese court. Although not explicitly declared, such maps of lost territories are organized according to the logic of China’s expansive imperial domain seen on early-modern All-under-Heavens maps.

The "South Seas Islands Location Map" (1947) is the first official map from the Chinese government using the U-shaped line to claim the South China Sea.
The U-Shaped Line resonates with the Sinocentric rings of the lost territories maps. Indeed, in the 1930s and 1940s some of the same people were involved in charting lost territories and the creating the U-Shaped Line.
The expansive rings of the lost territories maps visually resonate with the center/periphery cartography that characterizes All-under-Heavens maps and Ch’eonhado.

Maps of humiliation that highlighted lost territories were popular between 1916 and 1940. They reappeared in the 1990s as part of the PRC's patriotic education campaign.
To celebrate the return of Hong Kong in 1997, China's top official cartographic press published Maps of a Century of National Humiliation in Modern China which reproduces many of the features of maps from the early 20th century.
It was republished in 2005 to mark the 60th anniversary of China's victory over Japan.

For example, this map from Maps of a Century of National Humiliation in Modern China (1997/2005) records territories that Czarist Russia stole from China. 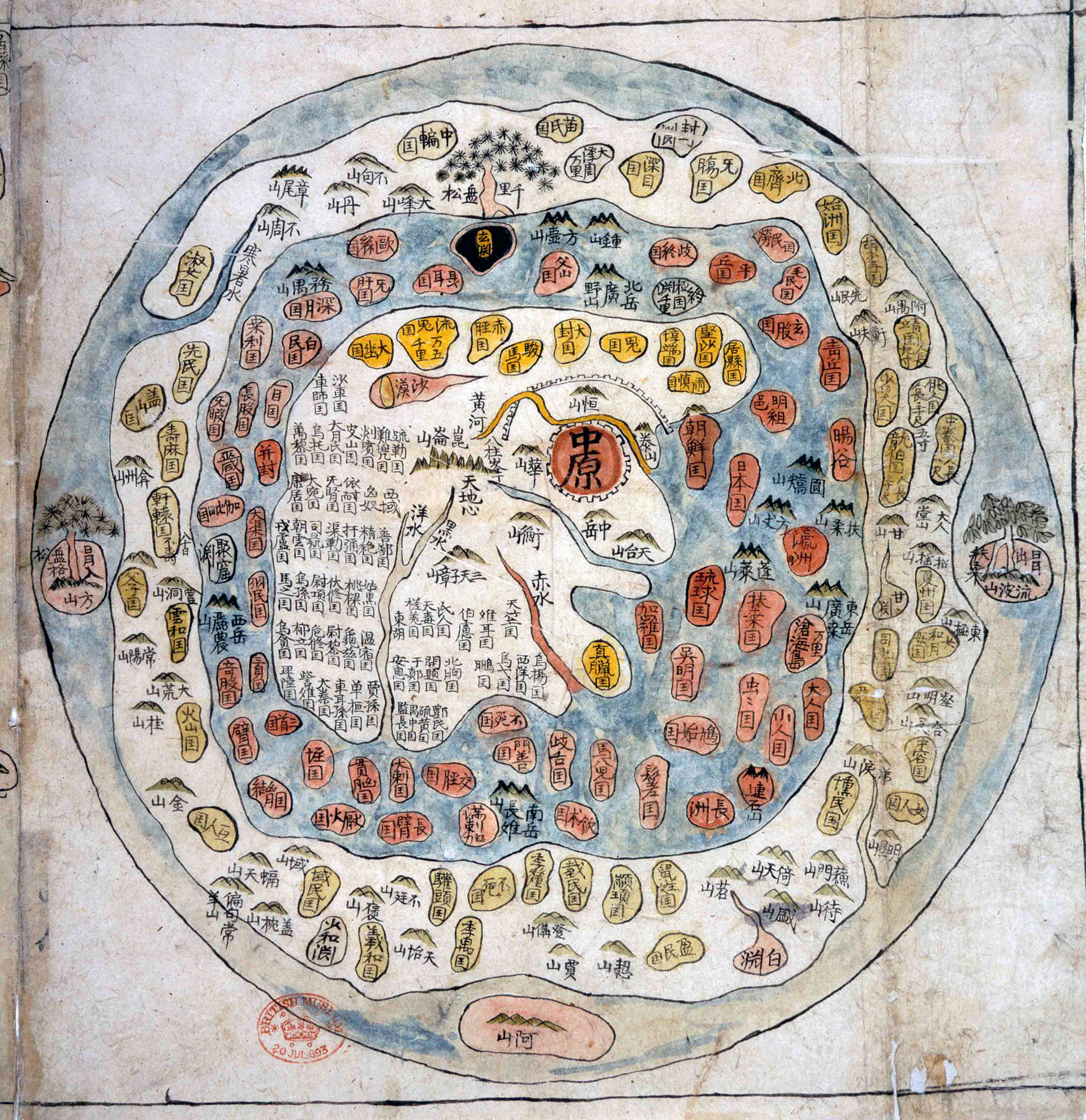 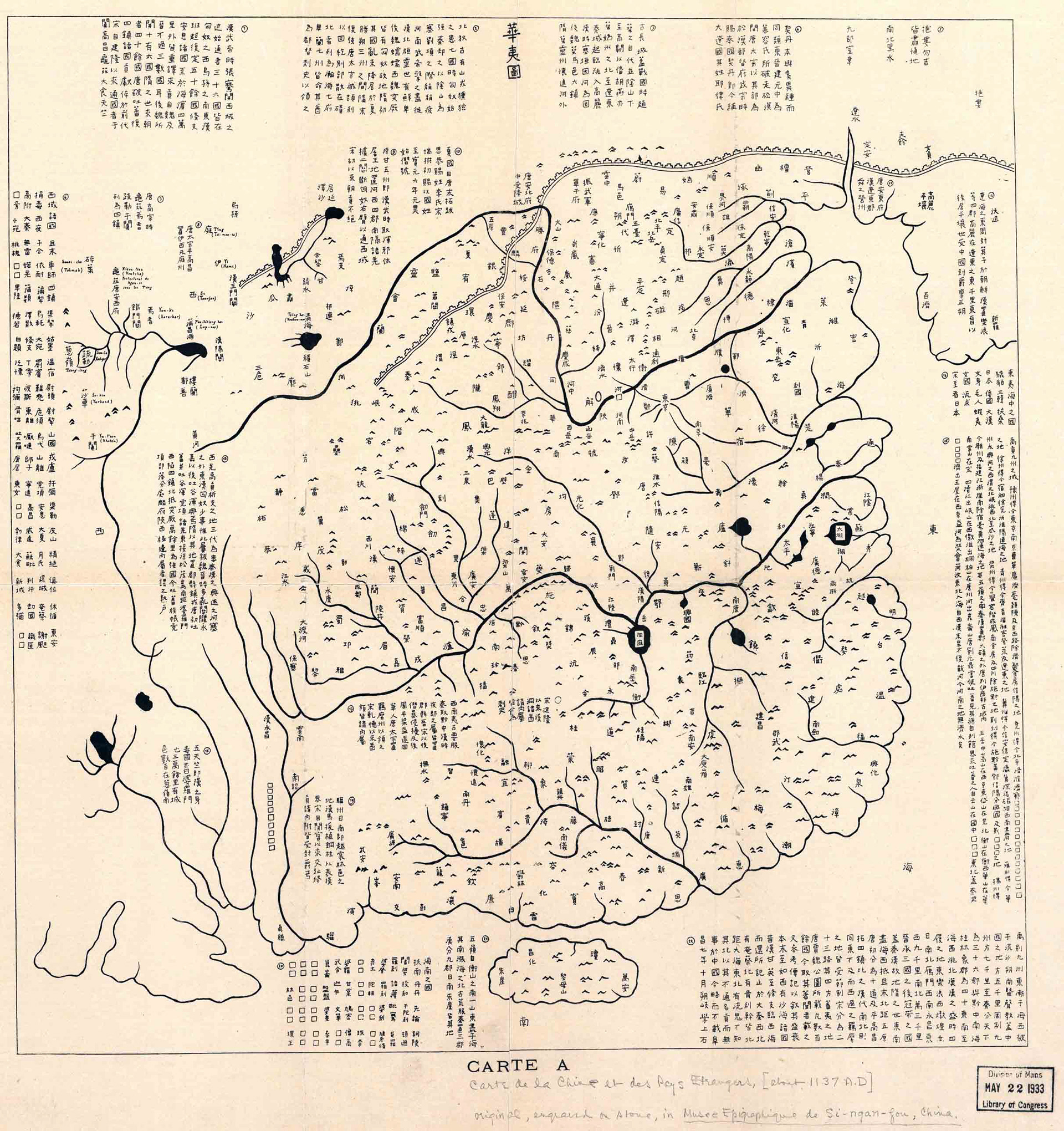 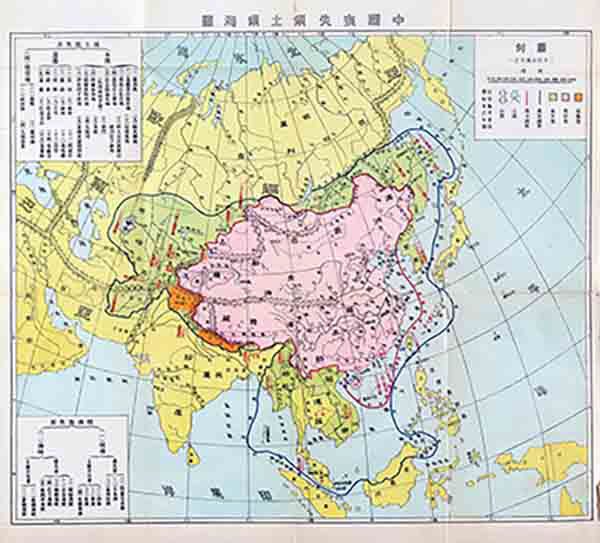 China's 21st century official maps that include the U-shaped line thus use the aesthetic technique of concentric circles to claim lost territories.
These maps don't record the PRC's actual control over the South China Sea. Rather than serve as evidence of territorial sovereignty, these historical maps of China and contemporary maps of the South China Sea work with each other, and respond to each other, to celebrate China’s imperial expansion, lament its lost territories, and fight to recover them.
The last two maps graphically show an infectious passion for territory and glory: the image on the left is from the Chinese passport, and the one on the right is from the CCP's official newspaper, the People's Daily, which declares "China: Not one inch less."
Once again, they don't just describe the situation as “a picture, a diagram, a chart, a table, and a map.” Rather, they actively “hope, scheme, plan, plot against, and covet” to create a new regional order that evokes pride among many in the PRC, while angering many in Southeast Asia.
With map-fare, such maps are world-making in the sense that their cartographic "view of the world" shapes their ideological "worldview": in this case China's imperial irredentist ideology.
For more about critical cartography, map-fare, and Chinese maps, see:
Smith, Mapping China and the Question of a China-Centered Tributary System
History of Cartography, vol.2, bk.2: Cartography in the Traditional East and Southeast Asian Societies
Cartographic Anxieties (in East Asia)
Chapter 7: Maps, Space, and Power of Sensible Politics
To cite this essay: William A. Callahan, "Map-fare: A Cartographic Photo-Essay," Sensible Politics website (2020), https://sensiblepolitics.net/map-fare.
back to research
↑Back to Top

We use cookies to help ensure you have the best possible experience when using our website. By continuing we will assume you agree to us storing cookies. Continue